Twice in the space of one week I have seen Conor McGregor and American Football mentioned in the same headline. Once is coincidence. Twice is a trend. I suppose it was only a matter of time before Mystic Mac’s Macho Mania was supplanted to pump ups and pep talks in the huddle. And while I was initially surprised, it makes complete sense. Conor McGregor is an international sports star. And a consummate competitor. In fact, how have teams not gone to him sooner for some motivational mojo?

In a recent interview with ESPN University of Michigan Defensive End Chase Winovich cited the Dublin UFC Star as an inspiration for his rise to success. Winovich underwent a transformation from an average Tight End to a dominating force on the Defensive Line.  He drew parallels between McGregor’s ascension from Dublin plumber to top of the sports entertainment world, to his own journey from a blue collar small town family to Primetime D1 Football. He then did whatever it took to excel at his position while maintaining an unrelenting belief that he would succeed. Sound familiar?

Winovich and McGregors paths may once cross again if the college standout makes it to the pros. Conor was a guest of the Dallas Cowboys this weekend gone by as they finally rose from their funk and dominated the Jaguars at home. The key to Dallas’s rejuvenated performance? Conor McGregor. The Dublin native was a colourful figure full of bravado on the sideline and even delivered some brief pre game words of encouragement. It seems that Conor’s cocksureness lit the spark that the Cowboys were missing.  Dak and Zeke even busted out McGregor’s pre fight swagger when celebrating their touchdowns, truly illustrating how big an influence the Irishman had on the Cowboys mentality that Sunday evening. (Dak Prescott should really teach McGregor how to throw a spiral though, this effort is awful.) 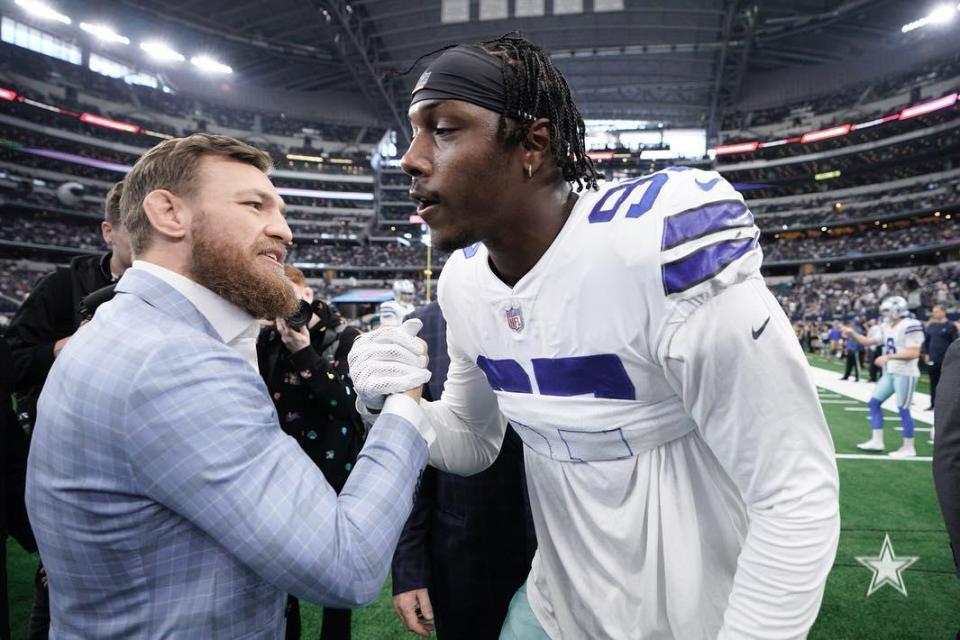 Could McGregor’s recent American football cameo be a foray into an as yet untapped market? Is the Notorious plotting a post UFC gig as a professional pump upper? Or was it just a once off. After the reception from the Dallas players he would surely at least consider motivational speaker as a potential new business venture. Such was the talismanic effect of McGregor’s presence that it would not be at all surprising if we start seeing more of the bearded brawler on the sidelines of professional sports teams.

The @dallascowboys getting a little pregame fire from @TheNotoriousMMA 😳 (via @dillondanis) https://t.co/DzZExM0QKD

As for McGregor – this piece of mostly positive media could not have come at a better time. After his recent defeat, his mortality as a fighter looms even larger. And while the clouds of bad publicity have mostly cleared, his future in the UFC has most definitely been called into question. But this is a football blog and not an MMA one. So will we be seeing Conor on the gridiron again soon? You can count on it.