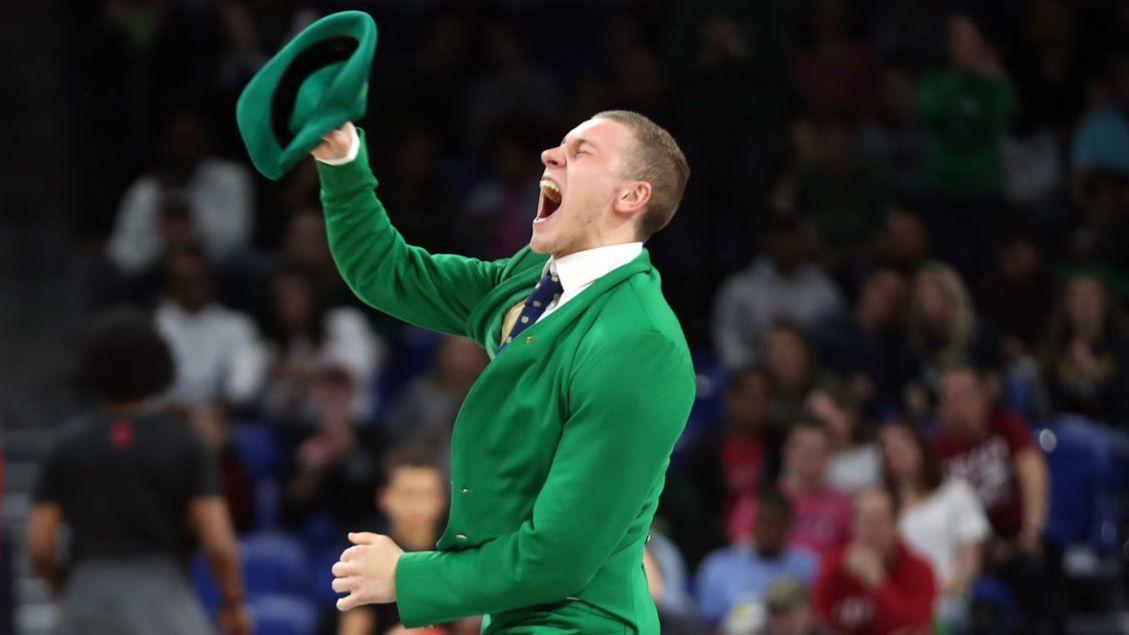 The Notre Dame mascot is one of the most iconic in sport. On game day, the spirit of the ‘Fighting Irish” is brought to life by the Cheer Squad, in particular those select few who don the green blazer and bowler to become the Leprechaun. Notre Dame recently announced three new mascots and one of those fortunate enough to have earned this honour, is Conal Fagan. Conal hails from Derry, in the North of Ireland and is the first native Irishman to take on the mantle of the Notre Dame Leprechaun.  But how does a kid from Ireland end up as Notre Dame’s most recognisable representative? We caught up with Conal and he told us all about his amazing journey from St Columb’s College in Derry to a scholarship studying Political Science and Peace Studies in South Bend.

So how just did Conal end up at Notre Dame?

“Two kids from my school had gone to study in the US before me, so they really inspired me to look into it. “ While still in school, Conal began applying for the Sutton Trust, a program which helps youngsters from low and middle income families apply to Colleges in the states. “The process for applying to US colleges is a lot more holistic and denser than applying in the UK or Ireland so it’s not really something you do half-heartedly. As soon as I put my mind to it, I knew that the US was where I needed to be.” As part of the Sutton Trust program, Conal was flown to the US to experience first-hand what college life was like in the States. After months of research and preparation, Conal’s decision came down to either Notre Dame or University of North Carolina. “I’m confident I made the right choice!”

What was the draw of Notre Dame?

For Conal, it was vital that he ended up in a place where he would feel right at home, and where he would be part of a community. “A word that really resonates with people here is ‘family’ – no matter when you graduated, if you meet a fellow alum there’s an instant connection.” The Notre Dame family has a global reach, even as far as South Africa, which Conal found out while coaching soccer in the townships as a volunteer last summer. A family of Notre Dame Fans spotted the ND hoodie he was wearing and instantly recognised him as one of their own. It was then that it really hit home for Conal how powerful and influential the ND brand is around the world. “One of the hardest things to explain back home is just how influential and integral Alumni are.”

In addition to being a lifelong member of such a powerful graduate network, the opportunities offered to students at Notre Dame is absolutely “crazy”. From getting to travel around the world for research to meeting some of the most promising young athletes, there’s so much to do. The driving factor for moving abroad to study is summed up by Conal as a desire for self-growth, and to defy the norm. “One of the biggest reasons why I decided to move to the US was that I wanted to push myself outside of what was comfortable. And I really haven’t looked back since”.

Now to the burning question we all have, how the hell did Conal end up on the Notre Dame Cheerleading squad? Well, it all started with a Notre Dame Onesie. That onesie became his attire for every basketball game he attended, and at every game Conal would be courtside leading the fans in their chants. “ Going to the Brandywell ( the home ground of Derry City FC) to see Derry play, I used to sit in the ‘Jungle’ – so I had good experience of being noisy!”  But Conal wanted to do more at games than just sit in the crowd. He wanted to be a bigger part of the experience. And joining the cheer squad was the best way to do this.  “I honestly think the cheerleaders were confused as to how I was so energetic at the games! I had a friend on the squad and when she heard me discussing the possibility of joining, she gave me the push that I needed. It’s been such an incredible experience so far!”

What’s it like being the mascot and representing the Notre Dame spirit? “I can’t emphasise enough how amazing the experience has been”  Conal’s friends initially thought it would be hilarious if someone from Ireland auditioned for the role of the leprechaun, but once he began to realise what exactly the position meant and the opportunities that came with it, it was simply too good for him to turn down. Because mascots aren’t really a thing in Ireland, at first it was quite difficult for Conal to convey the significance of the role, but one he started to appear on TV and on social media people began to grasp the idea a little better.

“Putting on the suit honestly makes you feel like a superhero. When you adopt this persona, it represents more than you can ever imagine.”

The first few weeks of being the mascot were quite overwhelming for Conal as he adjusted to being bombarded for photograph requests as well as being constantly on the go to events, games and other appearances. But no matter how hectic the schedule, for Conal “..The benefits will always outweigh the drawbacks.”

“Pulling on that jersey (in my case a suit) is one of the best feelings. It’s the stuff dreams are made of”.

As Cheerleading isn’t really a thing here in Ireland, can you tell us how big part of University sports culture it is in the States?

“A lot of people’s perceptions of cheerleading are based on what they see in movies, and to be honest, it couldn’t be further from the truth. I think most people imagine that cheerleading involves running around in a leotard waving pom- poms! In reality, I get to throw people in the air and do some really insane stunts, none of which I ever thought I could do! It’s a super dangerous sport that requires a huge amount of strength, technique and focus.” Cheerleaders in America are full time athletes, who have to train four times a week as well as lifting twice a week. But the reward for all the hard work is getting to run out in front of 80,000 people at home football games as well as the millions watching on TV at home. “I don’t think I could have ever pictured this as a kid back home!”

Becoming the face of the Fighting Irish cheer squad wasn’t Fagan’s first brush with Athletics. In fact, he had previously been part of the Notre Dame Men’s Soccer programme! Before he came to South Bend, he was already playing soccer at a high level having made appearances for both the Northern Ireland U15/16 team as well as Derry City’s U17/19 team.  Fagan had already considered playing in a US college, but didn’t want soccer to define his university experience. An email from a highly respected coach encouraging him to give it a shot, however, made his decision a lot more straightforward. And although he did not ultimately make an appearance for the team, working with some of the best players and coaches in the country undoubtedly gave him a strong start and a competitive edge to his time in Notre Dame.

As Conal gears up for the 2019/2020 season, his main goal on the field is to learn how to do a flip! “It’s something I’ve always wanted to learn to do but never really been able to focus the time on so I feel that it’s the perfect time to take advantage.” Off the field, a summer internship in Australia awaits where he’ll be working with Paralympians and Disabled Athletes.  A flat out but very rewarding year awaits him! Best of luck Conal and thanks for taking the time to talk to Gaelic Gridiron!